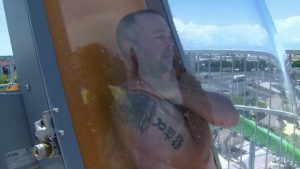 As Gigi Barnett reports, it was named the number one water slide in the nation.

Some Ocean City visitors want a quiet weekend at the beach on Memorial Day weekend. Others opt for a thrill ride.

“You’re going 37 miles an hour with nothing but your swimming trunks on, so that’s gotta say something,” said Jolly Roger General Manager Steve Pastusak.

At the top of the platform, riders step inside, arms crossed and head up. In three seconds, the trap door opens. One monster loop leads to a splashout at the end.

Swimmers shoot down at 37 miles an hour. That force will take them around a loop. You can’t find this ride anywhere else on the East Coast.

“The reactions, the looks on their faces—it’s just a really great ride,” Pastusak said.

It’s just the kind of holiday thrill some swimmers seek.

The Travel Channel named the Aqua Loop one of the top three summer thrills this year.